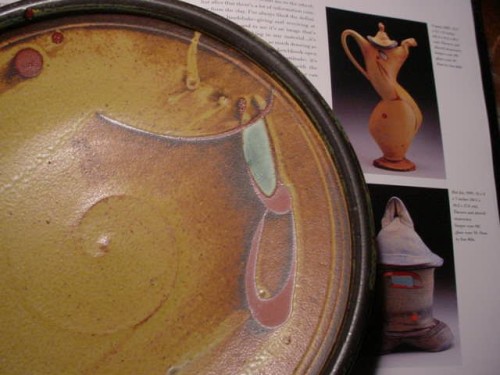 Yes, I brought home a trophy… nicely discounted for workshop attendees, too!

This weekend was spent at the lovely 577 Foundation in Perrysburg. The former estate of the area’s wealthy Stranahan family, the foundation has nature trails, education programs, community flower and veggie gardens, a geodesic dome full of steamy green plants and fish ponds, and a thriving ceramics studio which Edith Franklin pioneered years ago (“when you all were just babies!”, she’ll say.)

Now Julie Beutler is at the helm, and she brings in some great workshops.  (Two years ago, Mel jacobsen came.) This year’s offering was Nick Joerling, and that’s where I have spent the last two days — in a padded metal folding chair at the pottery barn, from 10 to 5, watching.

I wanted to see how he made the animated, dancing potsI had seen in mags, in books and on posters. Since I have spent the summer using the wheel mostly to make parts — to be assembled later — I was fascinated with his views on altered pots, and the book he and Gay Smith and Suze Lindsay are cooking up about altered forms.

One thing he said was that, for better or worse, altered forms are more photo-friendly than, say, symmetrical, volumetric pieces like big open bowls, that have no obvious “front” or “profile”.

He says his work comes from a “drawing sensibility”, and it’s clear that his thought processes run that direction; his rims frame moving lines, he points out, the way a comic strip’s frame encloses a figure that might be moving past the boundaries of the box. The curved decorative lines he makes on tall forms are like the lines showing movement in a cartoon… “If I could make them outside the edge of the pot, I would.”

He’s from Western NC near Penland, surrounded by good potters, and he’s a neighbor of Paulus Behrenson.  He shared stories about teaching, learning and collaborating at the art/craft schools like Penland, Haystack and others, places with a special sociology where “everybody leaves their category behind, and gathers around the material”.

He also volunteered (or patiently fielded questions about) his own evolution as an artist. He talked a bit about  where his pots began. In grad school, he said, he made “a real timid and serious pot and tried to rescue it with decoration”.  Clearly, now, his pots have become anything but timid.  While he has no interest in “cute”, he feels that humor can be substantial in ceramics, not just superficial. It works the same way humor in conversation does — “it opens our ears to hear other things”.

He was incredibly generous with private information about his life, his business and studio practices, health insurance, and other personal stuff we interrogated him about. He even shared the story of his fairly recent near-death experience when, overcome by exposure to low levels of carbon monoxide (from a kiln behind a closed door, in a room with open windows) he passed out alone in his studio next to a firing kiln. His girlfriend found him hours later and he was life-flighted to the hospital — and lived to tell the tale, but not without cautionary advice about taking kiln ventilation seriously.

I came home last night a bit wound up from a whole day spent sitting, and drinking coffee, eating a huge potluck lunch, and the visual overstimulation of good slides.  I laid awake thinking about a lot of what he said about making pots.

He made the point that potters can enter the market too quickly, and be pushed in the wrong direction.

He suggests that there is a point at which you need to stop taking in images of other people’s pots and let your work feed off your own work.

He encouraged us to stay with a pot, past the point where the learning curve seems to stall, instead of moving on to more exciting novelties.  He suggested that working in series can help a pot evolve, and fine-tune unresolved details.

He points out that innovative, functional pots are worthwhile, but warns against a tendency to “try too hard to be novel”.

And he points out that potters’ final products often hold a clue as to which part of the process they like best, in the making. Wet, soft clay? leather hard? decoration? firing?

At any rate, it was well worth my $75 admission, and I bought a plate as well. I likely will kick myself when EMU tuition is due and my studio account cupboard is bare, but I have pad pots in the glaze kiln right now, and a sale next weekend, and hope to be able to make up the difference.

Nick left us with a good feeling, some useful tools and tips, and a sense of familiarity I can’t put my finger on. Tall and slender, like David Hendley, … soft spoken, like Robert Piepenberg… a great smile and sparkle, like Josh DeWeese… a great sense of humor, like just about every potter I know.

I brought home a great plate. Jeff sighed. “We have to hang it on the wall, don’t we?”  Poor Jeff has wanted some hand thrown dinner plates for as long as we have been married, but I have yet to make work good enough to want to see every day. And frankly, if I made it now, I’d rather have the money! So at least for while, we’ll eat off the fake willow ware we got at the grocery store in Texas  with our frequent customer trading stamps.

This evening’s adventure included the Wood County Fair, barbershop quartets, chainsaw carvers, champion dairy cows and laying hens.. but that’s not a story for tonight. I’m off to the bathtub to soak, and will be up early to unload a cooling glaze kiln of pots for this weekend’s sale.