I found some beige sheer curtains with latticework tops for six bucks at the Goodwill. I had made curtains in the past for the bedroom end of my camper, but it had made it stuffy and trapped the heat — so I liked the idea of curtains that would allow a breeze across the top. I don’t need privacy curtains exactly because it’s just me camping, these days, but I like the idea of having a separation between bedroom and kitchen/eating area.

I ordered some camper curtain tabs on line and they arrived today, but they were too big. I sliced the little round end of the tab in half with a razor to make the fit in the track. I had no patience for sewing the things on so I used a stapler. My kind of project. 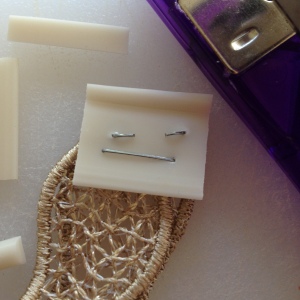 Also: the local discount stores like Big Lots have summer clearance on stuff like solar lights right now. I got a string of solar rope light on the cheap, indoor outdoor, and ran it behind the curtain rail down the side of the camper and above the kitchen end. I dropped the solar charger — a flat thing about the size of a wallet — face out against the window screen, tucked inside the cover (i could zip it in there, it’s weatherproof) and it charged in a semi shady spot from afternoon onward. I am going to like coming home in the dark and having a nice non-electric “night light” helping me find the switch. 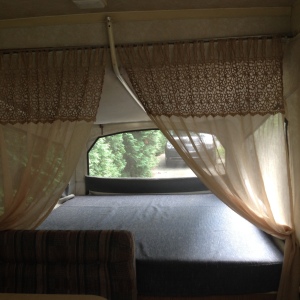 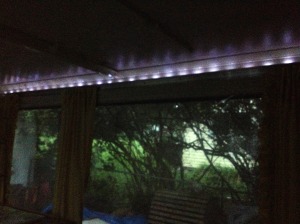