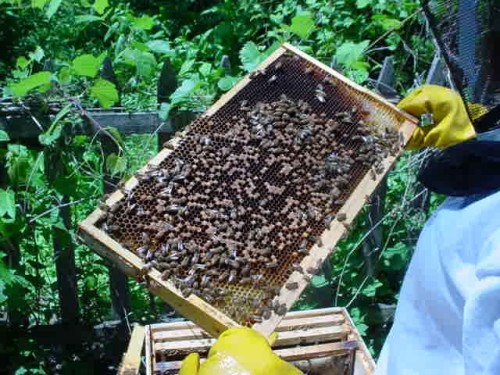 After two years of keeping a humming, populous hive, I lost my bees last winter.  No sign of the infamous colony collapse, though I’ve been forwarded more articles and theories than I can count to explain the nation’s disappearing bees: cell phones, pesticides, genetically modified crops, overuse of antibiotics and miticides by beekeepers, and on and on.

In my case, something happened to the queen in late summer, and there were no more eggs. The hive was full of honey, but bees have a relatively short lifespan (replaced by the offspring of the couple thousand eggs a day the queen produces.)  So… no babies, no future. Usually bees can raise a new queen (or three) by feeding royal jelly to selected eggs, but we had an early frost and my guess is that there were no eggs to raise, or there was nothing left to feed the baby bees.

At any rate, I had a healthy looking hive, loaded with honey and pollen, untouched by antibiotics and chemicals… but nobody home. So in April, I ordered a package of bees. (I posted about it in an earlier blog entry). The queen in her little box with her handmaids is suspended in a wire box of maybe 50,000 bees — which went bzzz bzzzz bzzzz  all the way home.

I loaded the bees into the hive and all seemed to go well, but… no eggs appeared in the following weeks, no larvae, no capped cells of brood.  I was mystified. Did I damage or kill the queen by accident? Was she infertile?

After sufficient time passed, I decided to “requeen”.  I bought another queen and introduced her, with  her handmaids in the little queen box, into the hive.  The swarm seemed unimpressed.  Hmmm.

After a few days, when she had not eaten through the bit of candy blocking her exit hole (which both feeds the bees and stalls the progress so that her pheromones have time to enthrall the hive) — I widened the hole. As I returned the box to the frames of comb, I watched one of the handmaids climb out of the queen box, where she was instantly stung to death. It wasn’t looking good for the home team.

That meant there likely was still a queen in my hive, and her swarm was protecting her territory.  No wonder the new queen was in no hurry to come out. But the reigning queen wasn’t laying. I closed up the hive for a day or two, hoping for no real reason that the new queen met a better welcome than her handmaid.

Then I opened it again a few days ago, and found… drone comb.

Allow me to pause here and push up my nerd glasses, before I launch into what I consider a fascinating bit of bug trivia.

A queen is raised by worker bees.  If they are unsatisfied with their current queen, they will do this covertly. (This boggles me. Secret late night committee meetings? A classified memo? They email each other about the queen problem, vote, what?)

In some corner out of traffic, they build extra large, long, peanut-shaped cells out of beeswax, around a few of the ordinary eggs the queen has already laid. They keep the bad queen away while they feed those larvae on royal jelly, which (like wax) they produce from glands on their bodies. When the babies are large enough, the bees cap the cell with wax, enclosing the fledgeling queens as they do all bee larvae.

The first queen to hatch emerges from her cell, then immediately locates  the other queen cells, breaks them open and stings the “unripe” queens to death. The queen has a stinger that doesn’t tear out, unlike other bees, so she can sting repeatedly and live to tell the story.

So now she’s queen… but she’s still a virgin. She needs to make her way out of the hive, undetected by the old queen, and fly straight up in the air and make big circles, reeking of hey-baby-come-and-get-it bee perfume, and hoping for a mate.

Every hive has a proportionately small number of drones. While the female bees (“workers”) clean the hive, make wax, feed babies, guard the hive and forage for five miles in every direction to gather pollen and nectar, the drones just hang out. They have no stingers, do no work, and eat enough honey that they are generally evicted in cold weather to die on the doorstep.

But this is their big moment. Drones are much bigger than the other bees — like houseflies, with enormous eyes. (The better to see you with, my dear!)

They will sniff out our virgin queen and mate in flight. Like the bee who stings, though, they will lose their lives in the process.  They leave a seminal sac inside the queen which will hold a year or more worth of sperm for her to store, and then break free leaving their entrails trailing out behind the queen’s abdomen.  Still, she somehow managed to get more “dates” — each providing a year’s worth of sperm. She flies back to the hive trailing their guts like an ad banner behind a biplane.

(A quick aside: in hotter climates where Africanized “killer” bees can survive the winters, the succession of matings can make for a nasty surprise. If the queen mates with some docile and well behaved Italian and Russian bees, then the beekeeper can expect to open the hive and find a docile swarm. But if she had an Africanized boyfriend somewhere in the middle, that same hive will go suddenly “killer” when his seminal sac gets a turn in line in the queen’s system.)

OK, so back to my Shakespearean drama: the virgin queen returns mated.  The hive will now go find the old queen and assassinate her. The queen is dead, long live the queen.

Now: back to my drone comb. If our queen goes for her one maiden flight –the only time she will ever leave the hive, before she spends the next five to seven years laying thousands of eggs a day — what happens if she doesn’t get a date?

What if there aren’t enough drones in flying distance, or she has B.O. , or for whatever reason she fails to breed?

She returns to the hive, and begins to lay eggs anyway, even though she has never mated. It’s called parthenogenesis.

But here’s the poetic irony: she only can lay male/drone eggs. Once her workers raise the male babies and die off, the hive is doomed. (Anybody see that movie, “Children of Men”?)  There’s some kind of sweet justice there, though.. that even though her hive can’t survive, the number of drones it will produce in its dying gesture will improve the luck of other virgin queens and other local hives.

Me, I want honey. I can’t eat poetic justice.

When I pulled a frame with drone brood (the photo is above) life got even more complicated. Real beekeepers who actually know what they are doing explained that if the round-capped drone cells (drones are bigger, remember? so they get odd shaped cells) are laid in a scattershot pattern instead of in tidy rows, if the eggs are laid shallowly in the cells and some cells contain more than one egg, I might have a worse problem: not an infertile queen, but a laying worker.

That’s nature’s plan C: a queenless hive with no hope of survival, can produce a worker bee capable of laying drone eggs.

Why is that bad? Because I could find an infertile queen, by searching every frame of comb, and kill her. Then they would accept a new queen if I bought one.

But the workers all look alike, so there’s no way to know which one is laying.

I was so sad. It seemed like there was no way out of the situation, and it’s too late in the season to buy another package of bees. They wouldn’t have time to build up stores for winter if they are just getting started in late May.

So  I wailed to the beekeeping list on Yahoo, and I’ll be damned if a woman in Brooklyn, Michigan didn’t come to my rescue.

Monday morning on the way home from the lake, we stopped at the farmhouse of a total stranger — a woman named Cheryl.  She let my kids visit her 4 day old puppies, dug up hostas and other perennials to send home with me in a box, and best of all, pulled two frames of healthy brood out of one of her beehives and boxed it up for me. Capped workers, uncapped little fat white grub-larvae, eggs, and hundreds of nurse-bees clinging to the frames came along for the ride.

Though I rarely use gloves or my bee-hat, I put on all my gear, not sure what would happen when I introduced “new-bees” to the hive. On Cheryl’s advice, I smoked hell out of the hive, pulled the drone comb frames out of the brood box and popped her frames in, bees and all.

My hope is that the hive will seize the opportunity and start feeding some of those eggs royal jelly, and raise a new queen. Lord knows she ought to be able to find a date, with all the drones in my hive. I scraped out some of the drone cells, just to keep a balance.. and also because Molly’s mouse and Connor’s rat think sweet, fat little bee larva grubs are delicious.

I’ll keep you posted. I’m staying out of the hive for a while, and will check back in a week or two and see if there are queen cells, or eggs. I’m not in a hurry, since there’s not much I can do if this last ditch effort doesn’t work. Go, bees!